The Virtual Foundation - your donation makes it happen

An Individual Can Implement His/Her Own Aid Project in the Internet Age: Old-fashioned aid funds such as Overseas Direct Aids between governments have often failed to trickle down to the remote corners of the world like the Himalayan highlands of Nepal. You can extend your personal assistance directly to the people with whom you establish and maintain direct personal contact in all corners of Asia. In the picture to the left, the equipment installation team is receiving traditional silk scarf in appreciation of the work done.

Nature of the Project and the Sociocultural Environment 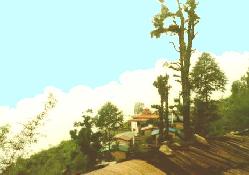 In the valley near the top of the range nestle two modest Buddhist monasteries, Tashi Choling Gompa (picture to the right) and Pema Choling Gompa, and they together serve the inhabitants of 7-8 neighboring villages as the centers of their religious and social life. Both temples, however, had been lighted until recently only by smothering little kerosine lamps, which were still an expensive luxury due to the high cost of fuel when "portered" up all the way from Kathmandu.

Like kerosine, all other consumer goods brought in from outside remained costly to the cash-stripped monasteries even though their operating expenses have always been provided for by the faithful villagers. If you are to visit these people, you will first drive quite a distance until you hit the narrow mountain pass. And then on, only several hours of hard work trekking the hills will take you to these temples.

The next two pictures are the close shots of Pema Choling Gompa. To the left is the front view of the building, and the solar panels are shown installed on the roof of the pagoda (right below) sitting on top of the building.

First of all, it now provides electric lighting systems to these two monasteries. To properly understand its significance, we must first realize that most of us in today's Japan are no longer able to feel what it is really like to live without electricity. In addition to not just having no electricity, no gas, no running water, etc., it also means that we don't have the amenities now taken for granted such as telephone, radio and television. In such an environment, therefore, people living in mountainous northern regions of Nepal use their Buddhist monasteries as the multiple-function centers of their daily life.

In addition to being the center of spiritual life, these temples also serve as the community centers for the villagers who flock together on various religious festivals and services held throughout the year. They also function as the sole community school for both adults and children like the Terakoyas (temple classes) used to function in Japan before the modern times. For these reasons, therefore, the introduction of solar energy lighting systems to the monasteries is bound to give fresh impetus to new ways of doing things altering, hopefully all for the better, the life and daily activities of the people in the Helambu region.


Looking at What Has Happened to the monasteries after Installation

Now, let us look at some of the pictures sent us recently depicting the changes brought about to different rooms and facilities of the monastery as a result of solar energy electrification. The first two pictures are the main shrine assembly hall with statues lighted in the evening hours. We had asked the Lotus Energy people to take both "before" and "after" pictures, but the shots taken before installation failed due to lack of light, further illustrating the point.

The short-term objective of this project is to lighten up the monasteries, enable more effective and safe conduct of religious and educational services so as to encourage greater participation in these and other civic activities by the people of the area's villages. As already said, most rooms of the monasteries are poorly ventilated due to cold climate making it inevitably hazardous to health to burn wood or kerosine for lighting purposes. Solar energy electrification will eliminate this, while also contributing to the reduction of forest destruction in this region where regrowth is a very difficult process. Also, it is noted from the long-term standpoint that successful Nepal projects will enhance the feasibility of similar projects elsewhere across the Himalayan highland communities such as Bhutan, northern India, and Tibet.

Besides, since these monasteries do occupy a central role in providing important centers of the everyday life in the Himalayan communities, the future possibility of powering up these solar facilities to enable them to have direct access to the Internet will be a truly welcome occasion for deepening not only the regional unity and cooperation, but also contributing to the cause of global citizenship.

Thus, the utilization and wider application of the renewable energy technology in the Himalayan countries promise to achieve the dual goal of improving human health and quality of life on the one hand, and enhance the educational and social opportunities without endangering the region's delicate natural environment. 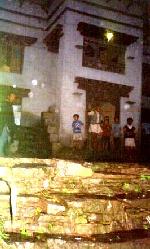 The picture to the right shows the front entrance of Tashi Choling Gompa as it is illuminated by an overhead electric lighting fixture. In spite of some delay due to the start of the monsoon season, the installation works and the post-installation system checkups at both gompas were completed by the middle of July.

The picture to the right was taken at the gathering of the Lamas and the local people in celebration of the completion of the gompa's electrification. The local communities are fully aware of the opportunities of improving the quality of their community life as a result. According to a preliminary report filed by Lotus Energy Co., "the monastery officials were extremely happy to have received this kind of meaningful help for their community's religious activities. Both gompas were happy that they would not be able to continue pujas into the night and felt that the presence of such lighting systems would certainly increase community participation and use of the gompas."

"Expenses for kerosene will be eliminated now and they hope to use the savings for other purposes including expanding the system in the future if required. At Pema Choling, the wall paintings will no longer be subjected to the blackening from fumes of the small kerosene lamps and neither will the Lamas and community smell the fumes any longer."

The last three pictures were taken at Tashi Choling on the specially planned formal "puja" dedication in celebration of the coming of the solar energy lighting system. To the right is a picture of the main assembly hall with statues glistening under faint blue solar light. Such services have always performed in the dark interior of the hall, but now people can see everything from the Buddhas on down to every decorative details of the interior and, of course, the presiding Lamas.

Exactly the same thing is beginning to happen to the educational environment at the temple. The elimination of darkness and fumes will help the local youngsters learn how to read and write without fear of impairing eyesight.

To the left is the scene of the dedication service. The Choling's high Lama and his followers are at the right chanting sutra while the Choling Long Dung Chen musical horns trumpet religious music.

Numerous Tibetan Buddhist monasteries like this are scattered across the foothills of the Himalayas from Tibet, across the entire range through Nepal, Bhutan, and the northern sections of India, crisscrossing modern national boundaries in peaceful cohabitation with other religions and cultures.

The participation by Mr. N. Tamura in this Nepal project of the Virtual Foundation USA/Japan marks the long awaited beginning of a new Internet philanthropy in Asia, which is based on the premise that the donors come in and maintain direct contact and communication with the beneficiaries. This will ensure not only the effectiveness and success of the projects they get involved, but also promise the growth and deepening of mutual understanding and respect amongst all peoples of the world as we move into the 21st century.

Students at the Chenango Forks High School Model United Nations Club (near Binghamton, New York) have decided to use delegate fees they receive from running a one-day Model UN conference to fund a Virtual Foundation project. Model United Nations is a program designed for secondary school and college students who are interested in current events and world issues. At conferences, students take the positions of different countries, debating and then voting on resolutions to address topics of concern to their nations.

Club officers at Chenango Forks were intrigued by the idea of doing something to address world problems as well as debating about them. Members of the Economic and Social Council at the conference will debate and then vote, choosing from Virtual Foundation projects under $1000 which are currently unfunded. They will then present their decision to the entire conference during the closing plenary session.

There are five committees at the conference: Economic and Social Council, Security Council, International Court of Justice, and Legal and Political Committee. Over 100 students from 8 schools in the Central New York State region are planning to attend.

Chenango Forks Model UN sponsorship of an entire Virtual Foundation project is made possible with a partial matching grant from the Open Society Institute.

"I will care about this tree just as my parents care about me." stated Zhou Xiaolu, a student of Kexing Experiment Middle School. She is one of the volunteers from two colleges and three middle schools who are now tending trees with tools bought by a Virtual Foundation grant.

The trees are part of a stand of more than 21,000 acres of trees which had been planted in a park near Beijing. Financial difficulties had prevented the trees from getting care they needed. To encourage the trees to grow quickly and become healthy, the Friends of Nature in Beijing decided to recruit volunteers to tend the trees. The group knew that there were schoolchildren interested in volunteering, but they needed to buy tools. So they worked through a local partner to place a proposal on the Virtual Foundation.

Esther Schmidt, a long-time volunteer tree planter in New York City, funded this proposal, named "Adopt Trees". She is now exchanging correspondence with the project organizers, and has received news clippings and photographs. One of the photographs (above) shows children working on the trees with the new tools.